Letter from Greece: Athens at War With Itself

Editor's Note: This Field Note was written by Stratfor Europe analyst Adriano Bosoni, who is on the ground in Athens during one of the most critical weeks in the ongoing crisis. Field Notes are personal observations and reflections. These are raw intelligence, preliminary and often impressionistic. They are not analyses.

Athens looks like a city that has weathered some unspecified natural disaster. At least a third of the stores in downtown Athens are closed and abandoned. At every ATM, at least a dozen people wait in line hoping to take out the 60 euros ($67) the government allows. The current phase of the Greek crisis began after Prime Minister Alexis Tsipras called a nationwide referendum June 27, which quickly led to the introduction of capital controls. Now most Greeks spend the day staring at their televisions or phones trying to figure out what will happen next in their country, only to be given a combination of facts and rumors, truth and lies, propaganda and wishful thinking.

One indisputable truth is that Greece is a nation at war with itself. On June 29, several thousand people gathered in front of the Greek parliament to express their opposition to an agreement between Athens and its creditors – one that relied on terms defined by the lenders. One day later, however, another group of Greeks demonstrated in the same spot, this time demanding that the government accept the creditors' terms. 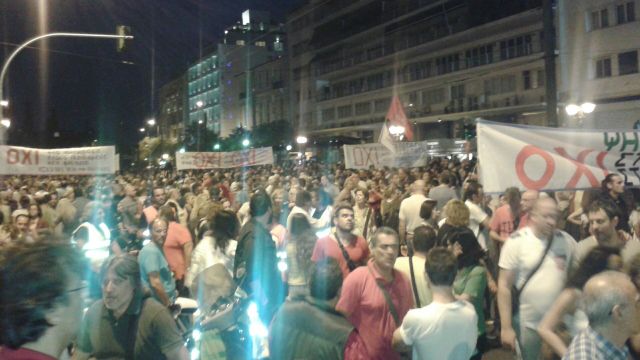 Greek "no" protesters gather outside of the parliament building in Athens on July 29 to rally against an agreement with lenders. (Adriano Bosoni/Stratfor)

The opponents of the deal currently on offer are a complex group. Many of them are supporters of the ruling Coalition of the Radical Left, known as Syriza. Others are unemployed or pensioners who do not want to face more spending cuts and tax hikes. Many of those opposed to the agreement belong to the lower middle class. These are men and women who probably still have a job, but who have lost a great deal since the beginning of the crisis and are worried that the current terms will make their lives even harder.

The anti-agreement, or "no," camp is divided on the question of whether Greece should remain in the eurozone. During the June 29 demonstration, many of the speakers said they were not against the common euro currency, but only against austerity. Others, however, think that Greece needs to return to the drachma, which Greece abandoned in 2002 in favor of the euro. During the demonstration, one of the protesters told me that the government may be a bit amateurish in its negotiating tactics, but that Prime Minister Alexis Tsipras is the most honest politician the country has seen in a long time. For these people, Syriza is the first party in decades to truly fight for the dignity of the Greek people.

The "yes" group, those who support the deal formulated by Greece's lenders, are a somewhat more homogeneous group. For them, there is a direct connection between supporting the agreement and remaining in the eurozone, even if the government in Athens is saying the opposite. Unlike the June 29 protest, in the June 30 demonstration there were several EU flags. 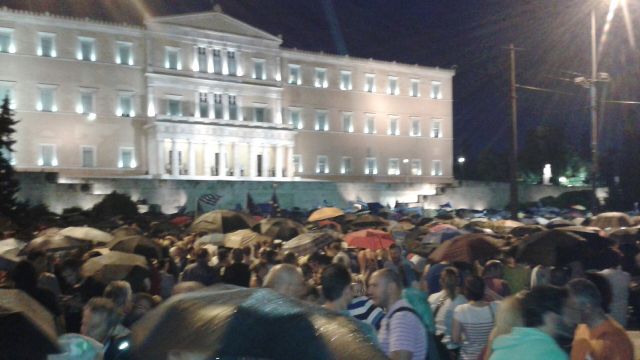 Demonstrators calling for a "yes" referendum vote rally July 30 outside of the parliament building in Athens, a day after "no" protests. (Adriano Bosoni/Stratfor)

In broad terms, people who support the deal belong to the upper-middle class and are afraid that a Greek exit from the eurozone would dramatically worsen their quality of life. In the words of one of the protesters, "leaving the EU will be like leaving a part of our family. We have friends in Europe, we study in Europe and we travel in Europe. People should know that their actions have consequences and that they are about to sever our ties with the rest of our family."

Despite their differences, both camps have one thing in common: in five days they will be asked to express their opinion in a vaguely worded referendum that carries unknown consequences. The context could hardly be more dramatic: the Greek government imposed capital controls June 28 and Greek media are already reporting that the daily withdrawal limit of 60 euros will soon have to be dropped to 20 euros before the banks simply run out of money. The European Central Bank still has a card up its sleeve: it is the only actor that can delay or mitigate a complete collapse of the Greek banking sector by providing additional liquidity to Greek banks. The ECB, in principle an apolitical institution, is increasingly being forced to make political decisions.

In the meantime, the creditors are playing a dangerous game, betting that the "yes" vote will win the referendum and force Prime Minister Alexis Tsipras' resignation. But Greece's political crisis is so deep that even a "no" vote could bring about the end of the government, especially if it is followed by a collapse of the banking sector and a disorderly exit from the eurozone. Syriza was cautious enough to call a referendum that technically is not about the common currency. However, it could trigger a chain reaction that could eventually provoke a Grexit. Greece will soon enter the most prosperous months of the year — July and August, when the summer season reaches its height and many Greeks feel some temporary financial relief. Regardless of the outcome of the vote, this season will start amid deep uncertainty and fear of the future.