Armenia and Azerbaijan have been locked in a frozen conflict over the disputed enclave of Nagorno-Karabakh since 1994. Recently, as violence flared up again along the line of contact, I found myself coincidentally in the Armenian capital in need of a taxi from the airport.

It has become a cliche that taxi drivers have their fingers on the pulse of the city. But there is a great deal of truth to the trope — a conversation with a driver can be an excellent primer, especially when trying to get up to speed on a breaking crisis.

With this in mind, I chose my taxi carefully. Passing by a number of younger drivers with poor Russian, I chose a middle-aged man who spoke the language perfectly. When I got into his cab, he was visibly tense. There was a war going on, he told me, and many people were dying. He had just returned from "Karabakh," a shorthand name for the disputed region that means "black garden." 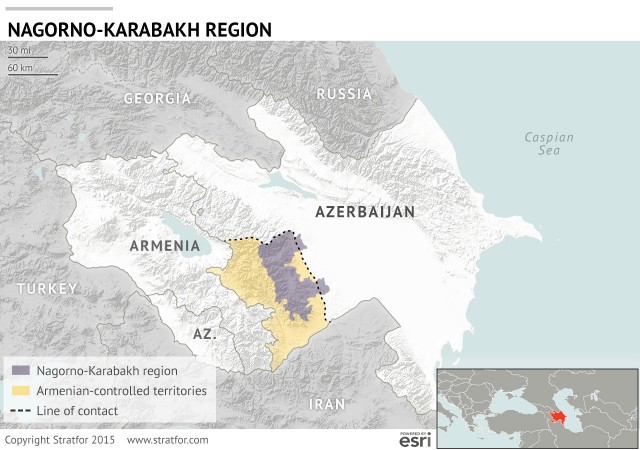 My driver made it clear that the fighting was intense and that it was not safe to travel anywhere along the frontline. However, the capital of the self-proclaimed Nagorno-Karabakh Republic, Stepanakert, was eerily calm — at least for now. This republic, unrecognized by the United Nations, has close ties to Armenia and operates essentially as part of the Armenian state.

I asked his opinion on the course of the fighting. He didn't think the clashes would last very long and predicted that things would soon return to an uneasy peace. He told me confidently, however, that the Armenian army was strong and would be able to take back its lost positions. Its troops, he said, had more cohesion than the Azerbaijani military, which he described as weak and cowering behind its machine gun positions. He praised a young Armenian soldier who singlehandedly took out an Azerbaijani tank and 10 troops by blowing himself up with a hand grenade.

As the proximate cause of the fighting he pinpointed the recent visit by Azerbaijani President Ilham Aliyev to the United States. Aliyev's government made the goodwill gesture of releasing some political prisoners before the trip, believing this would please the West. But Washington failed to recognize the action. The fighting started soon after — perhaps as a reminder of what Azerbaijan can do if it doesn't want to behave.

He also gave his read on the international dimensions of the outbreak in fighting. Turkish leaders traveled to the United States recently to attend the Nuclear Security Summit and had a frosty reception. Perhaps as a result, Turkish President Recep Tayyip Erdogan said Turkey would stand by Azerbaijan no matter what. My driver didn't think that the Russian forces posted in Armenia would intervene — they were there only to prevent Turkey from gaining undue influence.

As we continued to talk, my new friend reflected on the history of the simmering dispute. He praised former Azerbaijani President Heydar Aliyev for signing the 1994 cease-fire that ended the Nagorno-Karabakh War and lamented that Aliyev's son, the current president, was not as shrewd. He blamed the current situation on the younger Aliyev's bungling and on the fact that this generation of Azerbaijanis does not care as much about the conflict as their parents.

He welcomed the fact that the Armenian diaspora, by contrast, was strong in its resolve to support Yerevan and engage in the Nagorno-Karabakh dispute. Some had even traveled to the country to fight on the frontline. Armenia's population is around 3 million, but he estimated the number of Armenians abroad at 40 million. This is a gross exaggeration. The number is much closer to 8 million, even counting those who are of mixed ancestry, but the overblown estimate underlines how just much importance the isolated and impoverished nation places on its politically engaged diaspora.

My driver praised Russian President Vladimir Putin as a strong leader, one to be respected. Unlike the Ukrainian leaders, he said, Putin is interested only in strengthening his country, not in personal power or private gain. He blamed the selfishness of Kiev for the tumult in Ukraine and said Moscow bore no responsibility.

As I arrived at my destination, I paid my fare and made my way to my lodgings, mulling over his comments. Although everything he said had to be taken with a grain of salt, our brief conversation has given me the basic information I needed to start sifting through the competing narratives.